Who did it better?

Who Did It Better?

Chrysler or Nash, who built a better “Woodie” Sedan?

Like Chrysler, Ford and the rest of the auto industry, Nash offered nothing new for their post World War II model line up. Everyone was selling warmed over 1942 models. But it was a sellers market so it didn’t matter. The trick was to get more potential customers into the dealers showroom. To this end Chrysler was offering the Town and Country, a per-war success that was entirely new for 1946. Ford was offering the Sportsman, an all new model for 1946. Nash had limited resources and no time to develop an all new model. But a “Woodie”, now that might be doable.

The Nash Suburban debuted in 1946, it was built on the Ambassador Slipstream 4 door sedan. All the wood components were made by Ionia Manufacturing, of Ionia, Michigan and assembled by Seamon Body Company, Milwaukee, Wisconsin. The thin White Ash framing and Mahogany insert panels were applied over a skinned steel body. It looked a lot like the 1941-1942 Chrysler T&C Station Sedan and I’m sure it irritated the folks over at Chrysler. The suburban was offered from 1946 through 1948 , only a total of 1,000 were built for the three model years.

Chrysler continued to build the Town and Country sedan with all the wood components being structural. This type of construction required more time and considerable craftsmanship. Not to mention a lot more wood. The result being only two production cars (sedan and convertible) instead of the five that were originally planned. Nash on the other hand used the same method as Ford, a skinned steel sedan with wood fastened to metal. It was cheaper and faster.

So the question is, who built the better woodie sedan? Chrysler or Nash?

In retrospect, maybe Chrysler should have used the wood over steel method, this way they may have been built all five of the proposed T&C models. But then it probably would have defeated the original purpose. Chrysler, like Ford and Nash used their respective, unique woodies as traffic builders. It drew potential customers into the showroom. Selling the woodies was a bonus. 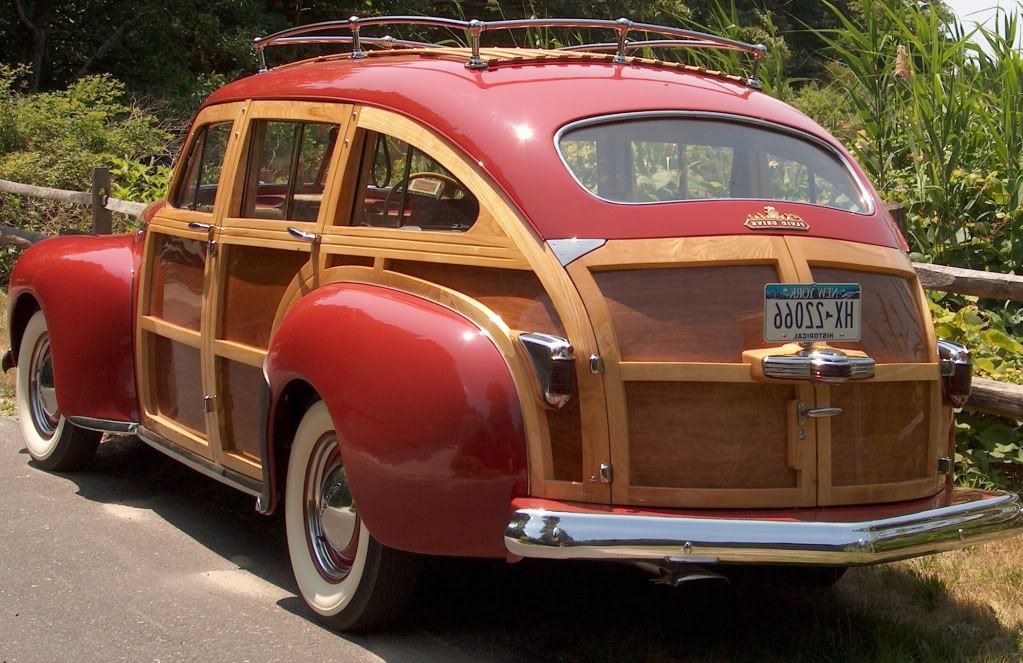 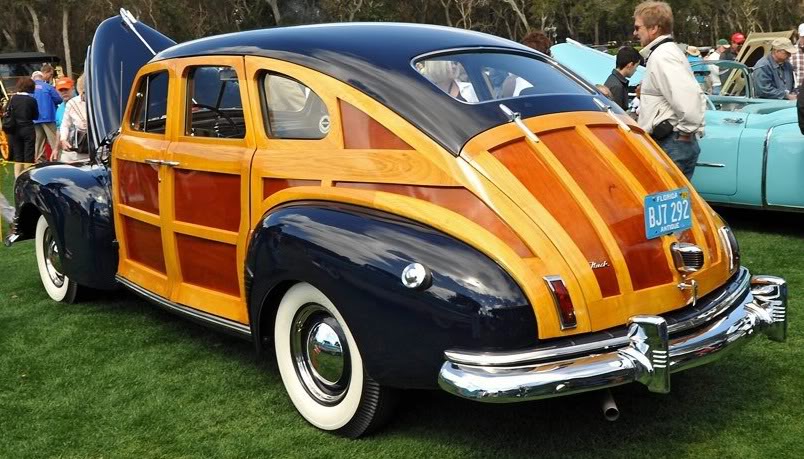 The 1941-42 Chrysler T&C (left) and the 1946-48 Nash Suburban were similar in design. Both followed the lines of the steel bodied sedans which made them unique. 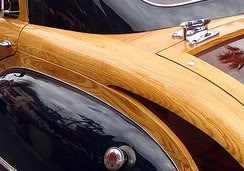 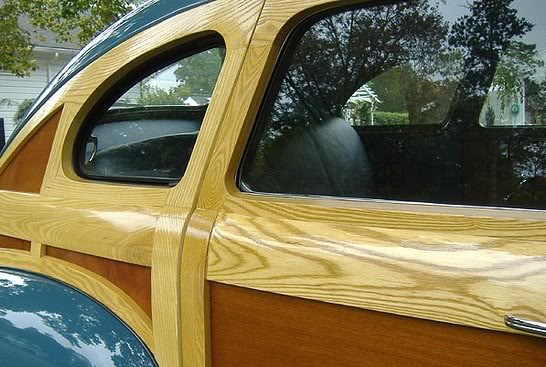 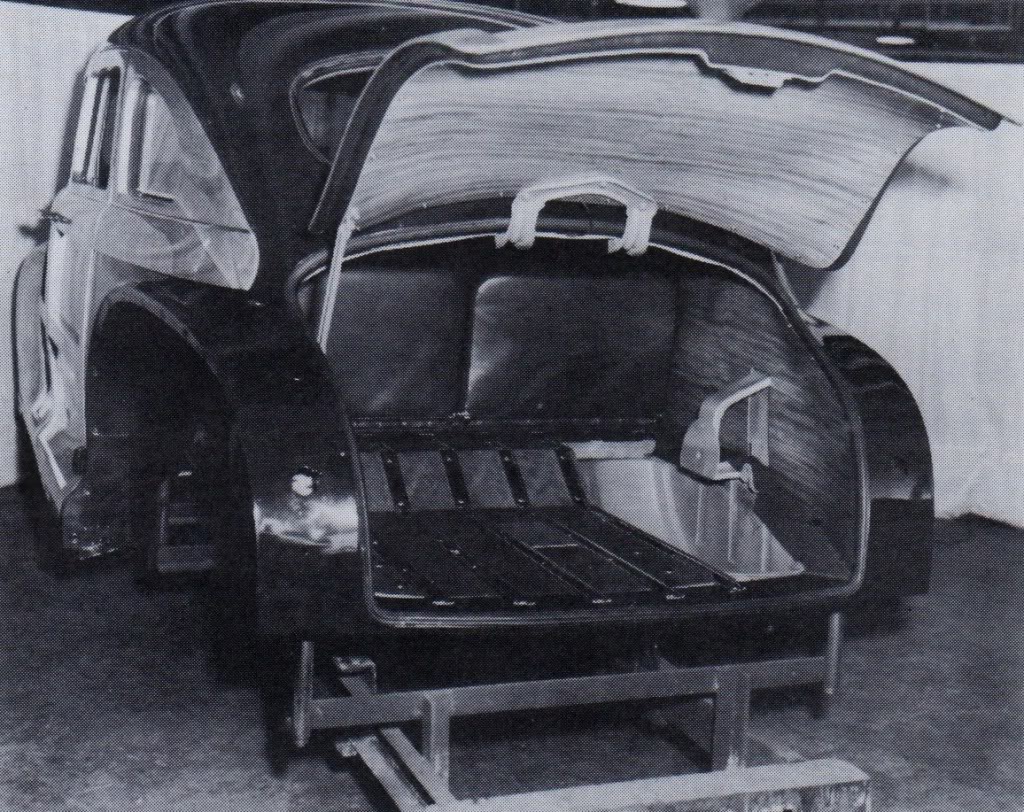 (Left), Chrysler did consider the wood on steel construction method in 1946 and actually built a prototype DeSoto sedan. But ultimately it was scrubbed. (Right) The Suburban wood components are fastened to the metal framework of the deck lid.

Who Did It Better?

Chrysler or Ford, who built a better “Woodie” convertible?

Chrysler and Ford were the only auto manufacturers to built wood bodied cars in house during the 40’s. Chrysler had Pekin Wood, in Helena, Arkansas and Ford had Iron Mountain, in Michigan’s upper peninsula.

However, Ford had more experience building station wagons. Chrysler had Pekin Wood build the component pieces of the Town & Country, than assembled them at their Jefferson plant in Detroit. While Ford built the entire Ford Sportsman body at Iron Mountain. And shipped the finished body to various assembly plants around the country for final assembly.

Each company had their own method of manufacture. The Chrysler process was a bit more complicated then Ford’s. We all know that the wood on a Town & Country is structural. It took more wood and more time to build a Town & Country. Ford on the other hand built their Sportsman using a steel skeleton, to which they attached a wood skin. It took less wood and less time to build the Sportsman.

Who’s wood was better? Was the White Ash used by Chrysler better than the Maple and Birch used by Ford? Both were hardwood with different grain patterns. The ash has a bold, open grain pattern that really stands out when varnished. The Maple or Birch has a closed, tighter grain pattern. The Chrysler I believe weathered somewhat better than Ford. This was probably attributed to the density and shear size of the wood used by Chrysler. Because the wood was structural the pieces used were thicker. Ford used the wood as a skin, it was thinner. Once weathered it did not take long before rotting through.

During the three year production run, 1946-1948, Ford built 3,692 Sportsman. During that same period Chrysler built 8,375 Town & Country Convertibles. It is estimated that around 100 Sportsman survive*. A survival rate of 2%. There 382 documented surviving T&C Convertibles. A survival rate of 4.6%. Ironically Chrysler adopted the steel skeleton building method in 1949.

So who did it better? 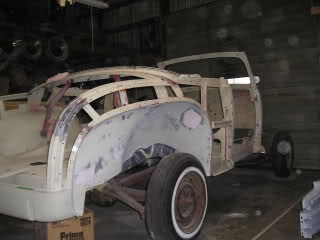 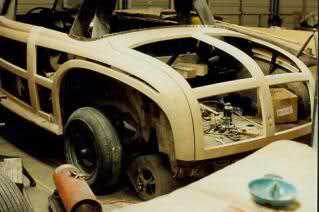 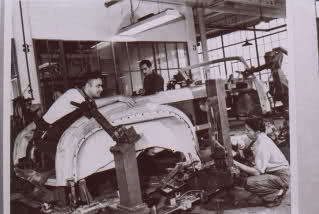 Production methods are compared. Ford on the left, Chrysler on the right.

Over time dash plastic did not hold up well, it warped and became brittle as seen here 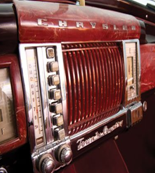 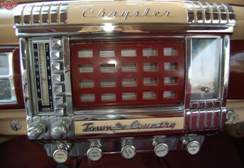 Chrysler offered a choice of ten colors in 1941 and introduced Mottled (Marbleized) plastic for a more luxurious look. Right, one set of plastic trim pieces for 1941 Sedan.
The radio grille changed from (1941 left, 1942 center, 1946-48 right) vertical ribs to horizontal bars (with basket weave) to an egg crate design. More die-cast in 1946-48.

Town and Country Prototypes – and a lingering question
At the end of World War II like every other auto maker, Chrysler was scrabbling to bring out something new for 1946. The most ambitious proposal were the five Town & Country models. They looked good on paper as illustrations but not practical when it can to production. So it came to be that a few prototypes were built

The 2 door Hardtop
Although six were produced I have always considered the hardtop a prototype because it never went into production. So the question is: why only six? This would have been an easy build. A convertible body with a coupe roof panel. So why only six? 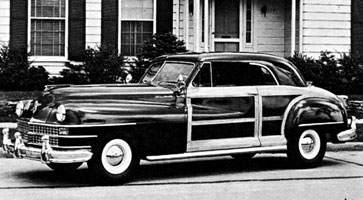 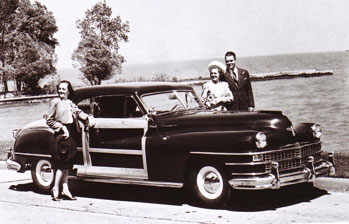 The Brougham
Only one Brougham was built so there is no argument about it being a prototype. What happened to it remains a mystery. Fortunately dedicated Town & Country collector Lloyd Mayes took it upon himself to successfully reproduce the Brougham. His finished car is very impressive. Although his interior is a personal preference and not what the factory did.

The Roadster
The Roadster was considered a whim. It looked interesting as an illustration in a brochure but totally impractical as a production car. The idea was quickly discarded as the reality of production complexity became apparent. Not to be deterred Town and Country collectors John Slusar and Lloyd Mayes ultimately collaborated to build this unique T&C. John Slusar did the research and started the build only to be frustrated and discouraged after several years of effort. In the end the project was turned over to Lloyd Mayes who finished the project. The finished car is a testimonial to John Slusars vision and tenacity, and Llyod Mayes’ resources and commitment. 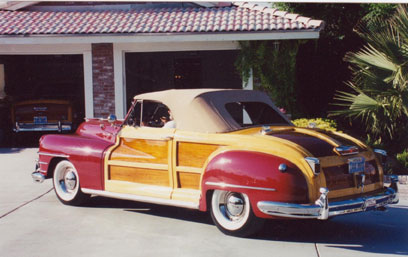 The six Cylinder Convertible
Another prototype not to well known was the C-38 Convertible. One was built, its ultimate disposal is a mystery. There are several factory photos of the car but no archival information as to what became of the car. Chrysler’s practice at the time was to eventually sell its prototypes and one-offs. So its safe to assume that this car was sold to someone. But again there is no official record. Which gives rise to another theory. It’s possible that the body was re-mounted on to a C-39 chassis. Now for the lingering question. I wonder why no collector has reproduced this car. It would be a somewhat easy project: take a T&C body and mount it on a C-38 chassis, add a Windsor front clip. Done! If I were 30 years younger and had the resources, I’d do it. 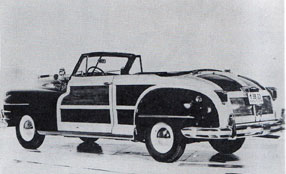 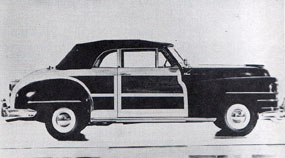 Lastly
And last but not least, one more one-off, prototype of sorts, but not officially factory made.  It’s the movie 1942 T&C convertible, which I will cover in my next installment.

As Club Historian I would like to write about and discuss cars with interesting histories.  I know many of you have such cars, with interesting histories. I would like to hear from you. All I need is some basic information: How you got the car? How long were you looking? Do you know anything about its past history? Did you restore it? How long did it take? And a couple of photos. You acn Email you information to me at: DLNARUS@yahoo.com  OR Mail to: Don Narus, 2325 Pine Ridge Way S. B-1, Palm Harbor, Florida 34684.

Has anyone spotted this T&C woodie sedan car lately? 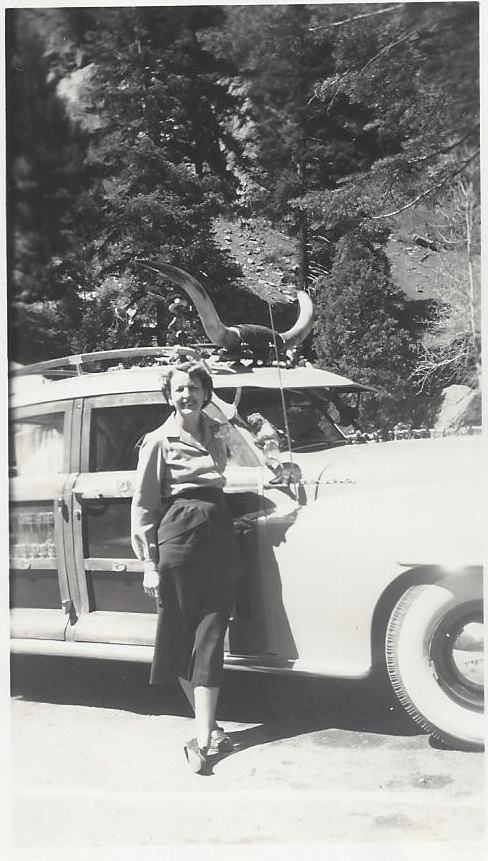